Another few minutes of strategy talk, this time discussing Strategical Paradoxes and their implication in Trading Card Games.

There may never be an answer. This is true in Mathematics and Aerospace Engineering everyday. And strangely it is just as true in the Pokemon TCG. For example, how does a player make a decision between Sycamore and Juniper in Expanded now that both have earned a Full art printing, using not personal preference but only strategy? It is hard to say what subtle capabilities that the art on a card can have.

But more powerful than these inescapable dead ends of thought are Intentional Paradoxes. As a poet,  I have been called to form intriguing paradoxes and oxymorons in order to illicit a more powerful response from the reader. But I hadn't, until the week after Nationals, thought about putting an intentional Paradox in my strategy.

In this short article I will discuss the nature of strategical paradoxes, and reveal the impact that they may have on each game of Pokemon we play.

Strategical Paradoxes can be found in almost every strategy game. They allow a Chess player to overcome obstacles and give a swordsman the upper hand. For convenience, my working definition of a Strategical Paradox is the ability to execute two opposing strategies at one time, or to be able to transition from one to the other suddenly. 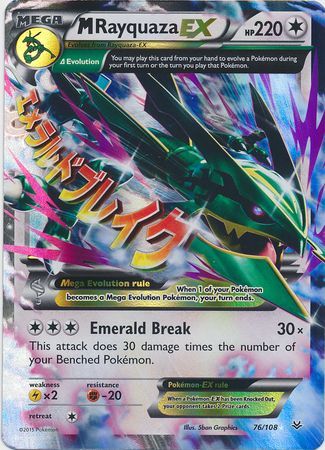 When I was in the cafeteria in Columbus on that Sunday, I had been collecting pieces of the Mega Rayquaza deck I will pilot PRC-on. I kept thinking that it was a strong play because of its speed in a slower format. When I got home and started to playtest, I quickly gleaned that Parallel City was the best and most easily splashed counter to my deck. Any archetype with even two copies could quickly swing the match in their favor by playing the card at a crucial time. So I had Ninetales for a while, but the inconsistency I saw deterred me eventually. I needed another productive attacker. I was searching through my boxes of basics and stage-one Pokemon and came across him. After a few passes I realized that later in a game, when my opponent has limited my bench in some way, Lucario does more damage. His attack is literally the opposite of Mega Rayquaza's. And his stats made me stick him in to try the scenario out. It turned out that he does in fact allow the deck to always deal damage; and Shaymin's convenient Sky Return attack makes it easy to control.

This is what I call the Bench Paradox.

The cool thing about strategical paradoxes is that they limit an opponent's decision making by presenting two opposing forces that are made stronger when the other is weakened. And this is only the first Paradox that I have noticed. The potential may lead to more of these seemingly not disruptable strategies succeeding on the large stage of a tournament.

Thanks for reading. I get excited when I find something new about the Pokemon TCG. And I've been more than excited to share with you. 60cards is a great resource for players, so please continue to enjoy free articles like this one.